The Acquisition of a '39

I'm sure we all have different stories to tell about the way we acquired our cars and I thought it would make for some good reading. Here's mine...

Ever since I can remember I've admired the lines of the '40 Ford and the '39 Deluxe Models. I owned a '48 Fordor when I was a kid and while I liked that car, the '40 Ford body style was always very special to me. I promised myself that one day I'd get one and restore it.

I was at a party one night a few years ago and started talking to another guest and found out he was the uncle of our host. He was about 73 at the time and we talked about this and that and the subject turned to cars. He mentioned that he had restored several Model As and the last one he did won the "Grand National Championship" at some car show. Looking back at that I suspect he was referring to an National Early Ford Club meet and he was awarded a best in show and/or a "Dearborn" or something like that.

He mentioned that he had a '39 Ford Deluxe Coupe that was in original condition and he wasn't sure what he was going to do with it. He was getting older and I think the thought of crawling around another car during restoration didn't really appeal to him. I said that I remember the '39 Ford was basically the same as the '40 except the bars in the grill were vertical instead of horizontal and it had a floor shift instead of the column shift. He said there was more to the differences than that but I was basically correct.

I said I'd like to come out and see the car sometime whenever his schedule would permit. He looked at me kinda funny and his demeanor seemed to change... He said things like "Well gee, why would you want to look at it...?" and "I'm kinda busy, don't know if I'd have the time" (he was retired) and "Would you really want to buy it...?". I said I didn't know about buying it but I'd sure like to see it sometime... I told him I'd call him the following week and see if could get our calendars together.

I did that the following week and he was tied up taking a trip to San Diego. I called the next weekend and he was busy going to Santa Barbara. The following weekend he didn't feel well and then it was something else and so on and so on and so on... I spoke to his niece (the host at that party) and she said that his cars were his babies and she could understand his attitude, he didn't want to part with them. Now... I can be a persistent son of a #@%$* when I want to be and press people when I have to but this was the uncle of a friend and I just decided to let the issue slide for awhile.

I got busy at work and it was almost a year later when I was walking though a shopping mall and several of the merchants were having sidewalk sales. One was an antique dealer and he had a number of old automobile advertisements on display. They were categorized by year and make and I leafed through to see if there were any for the '39 Ford. As it turns out there were several and I picked out the best one and bought it. I went to the local art supply and bought some museum board and took that and the advertisement home and mounted it, matted it, and framed it. I sent it to the uncle and attached a note saying that I hoped he enjoyed the picture and... "If he ever wanted to sell that car, please let me know."

Well... A few days later (the time it took for the mail to get to his house) he called me. I could hear the tears in his eyes as he thanked me for the picture, he thought it was framed beautifully and he really seemed to appreciate the effort. I was already conjuring up visions of his car in my driveway... He then dropped the bomb shell and said that he'd already sold the car...!!! I was shocked, how could he do this to me...? He said that after telling me that I'd probably want the picture back. That thought had occurred to me but I sucked it in and said no, the picture was his to enjoy, I was just sorry I didn't get a chance on that car. He then said that maybe there still was a chance... Hmmmmmmmmm...

He said that he'd heard that the present owner had lost interest in the project and nothing was happening with the car. He gave me his name and number and I began calling the new owner. I called morning, noon, and night and I could never find him at home. I was leaving messages on his recorder and he wasn't returning those calls. I began to think this just wasn't meant to be...

I got busy again with some work related things for a few months when the original owner (the uncle) called me and asked what ever happened. I told him the story and he said that he'd give the new owner a call and see what was going on. Twenty minutes later, the new owner called me back...!!! Progress...

It still took us 45 days to get our calendars in synch but I finally went to see the car. The new owner lived in Hawaiian Gardens and had quite a collection of cars including a Model T, a Model A, '56 Chevy Nomad, '57 Chrysler, all in good condition. He also had an old fire truck in need of restoration.

He had lost interest in the project. I think that he thought he was going to get the '39 running, throw a coat of paint on it and drive it away... It needed more than that.

The '39 was in original condition. It had been repainted a couple of times, the last time with a brush. The seat was in the car but not bolted down (I found out much later it was the wrong seat). And was it dirty...!!! I slammed my hand against the backrest and the dust billowed out like there was a sand storm inside. The rest of the interior looked like a bomb had gone off although all of the instrumentation was in place and the radio was still there. I even found the original owner's manual in the glove box.

The original wood graining on the dash was all but unrecognizable. In an effort to spruce that up, a previous owner had put some wood grain type contact paper across the top of the dash panel. The bezels around the speedometer and the instruments were rusted but looked like they could be salvaged.

I could tell that the frame needed straightening as the left front wheel looked to be slightly farther aft that the right front wheel. There wasn't a lot of rust on the car and I couldn't find much bondo. The nose of the hood didn't quite line up with the grill reinforcing my notion about the frame being crooked. A previous owner had torched a couple of holes in both of the bumpers, maybe to attach a grill guard or something.

The good thing about the car was that all of the parts were there. The only thing I found missing was the driver's door panel.

At this time I had to do some serious soul searching... I'd found the car I was looking for... Original condition (didn't have to fix someone else's mistakes)... All the parts were there... The price was fair... I'd just gotten a bonus at work so I had the money... The question was... Am I a man or what...?

The rest is history. I bought the car, interviewed and engaged a lot of professional help and some 16 months later, I drove it home. What a day...!!!

I work out of my home so I drive the '39 almost every day when I run errands to the Post Office or Kinko's. I always get strangers waving at me and other drivers at intersections asking me what year it is. It sometimes collects a crowd when I park it and I have trouble getting to where I'm supposed to be. I love it...

I always wanted to take the car back to that uncle of my friend and show him what I'd done with his "baby". He's a "purest" as opposed to a "street rodder" and he thought that nothing should go on the car if it wasn't original. I'd kept the '39 pretty much stock all the way down to using an original Ford color when I had it painted so I thought he'd be pleased. However, I was never able to see him again. He died of cancer six months before I completed the car.

Looking back at this whole project, all of the hassle, all of the phone calls, all of that money, and all of the work, that's my only disappointment. 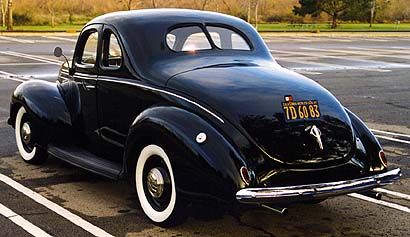