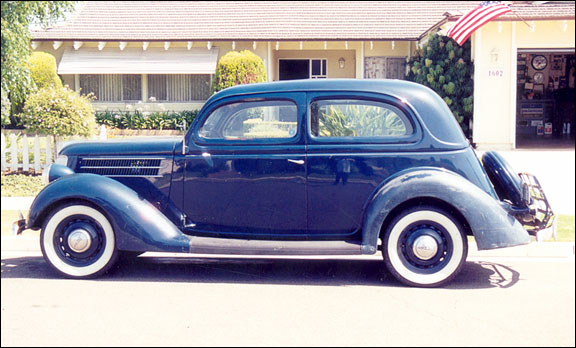 This is the story of "ROUGE 36" - also known as K.C. - the 1936 Ford Tudor Sedan. Our family has belonged to the Early Ford V-8 Club of America since 1966. We're charter members of Southern California Regional Group 11. The national club hosts V8 meets across the nation and has four classes of judging for the cars and trucks to compete in. The classes are Dearborn (restored like they came from the factory and point judged), TOURING (cars that are restored for driving and member's choice show), TOURING A (cars that are built for touring), and ROUGE (cars that have not been restored). A Rouge vehicle is judged in three different categories: Exterior, Interior, and Drive-Train. The Rouge award plaque can be awarded to a vehicle for any or all three of these categories providing that 90% of each of the categories has the factory finish and parts that came with the vehicle when it rolled off the assembly line. These cars walk a fine line on concourse day on what is acceptable and what is not. In 1996, at the St. Louis meet, K.C. won the Rouge plaque for interior and exterior. The club records do not show if this Ford was entered in the drive-train category. The older Rouge cars are kind of rare.

This is a little bit of the life story of K.C. - The 1936 Tudor Sedan. As far as we can tell K.C. was assembled in December of 1935 or January of 1936. A farmer in Green, Kansas purchased K.C. new. Kansas farm life was hard on cars of this era, no paved roads!

In 1948 Vincent Crough bought K.C. from the farmer. Mr. Crough was in the auto wrecking business and had five yards in and near Salina, Kansas. Fortunately, Mrs. Crough needed something to drive and I guess K.C. was the best prospect for the job at hand. In 1953 Mrs. Crough's children thought that K.C.'s mechanical brakes were unsafe and purchased for her a new Corvette. Mrs. Crough didn't like the Corvette and kept driving K.C. The family then put K.C. in the back of the family barn to make sure that Mrs. Crough couldn't get to it.

Mrs. Crough's grandson, Kevin White, purchased K.C. - the 1936 Ford, in 1989. K.C.'s new home was now Kansas City, Mo. Kevin drove K.C. to the 1996 Central National Meet in St. Louis and entered the car in the Rouge Class on concourse day. The judges awarded Kevin the Rouge plaque for the exterior and interior. Soon K.C. was in the garage again because Kevin had found a wife and started growing a family. The White's purchased a house to restore and K.C. was a good source of cash for the new project. An ad was placed on the National V-8 Club's web site. Fortunately, we saw it.

After an exchange of e-mails Kevin sent lots of digital photos of K.C. and a phone call was made to buy the 1936 Ford Tudor Sedan. Meantime, Kevin had been checking us out to see if K.C. would have a good home so far away. I sent photos of K.C.'s new home and Kevin showed them to his Grandmother and both agreed that K.C. was going to a loving home and that we should be the new caretakers in the life of K.C. - The 1936 Ford Tudor Sedan. Grandma Crough was 94.

K.C. made the trip to California in an enclosed trailer from Intercity Lines of Warren, MA. The Ford has 41,300 original miles on the odometer. The Ford tire pump is still in its original paper wrapper. By now you must of figured out how we came up with the name K.C. for the Ford.